The inverter is the heart of the photovoltaic system, who convert the direct current produced by the PV modules into alternating current, according grid parameters and module optimization.
The trend of increasing efficiency of photovoltaic cells has become an impulse for improve of devices cooperating with this energy source.


Using the latest technological achievements, MMB offers highly efficient and reliable devices for optimizing and converting energy from renewable sources. The new products are based on silicon carbide semiconductor. The new material allows for significant reductions in losses, dimensions and weight of devices.


Products based on silicon carbide are characterized by: 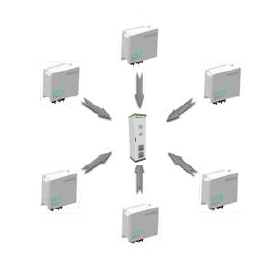 
The Multistring system topology allows you to optimize each modules chain. Independent tracking of the maximum power point affects the compensation of mismatch losses, which increase over the years as a result of degradation of the cells by PID, LID and leakage currents. The solution allows you to increase energy yield by 10% or more over a 20-year period.

Power optimizer for string of module


MMB Solarix String Optimizer is a DC / DC converter in the BOOST topology that supports two photovoltaic array. Each string has an independent MPPT system.


MMB Solarix 10.0 T4 is a four-wire grid inverter which allows operation with an unbalanced load. Product dedicated to home photovoltaic micro installations. The use of silicon carbide transistors provides high quality and efficiency of the energy conversion.


A three-level central grid inverter on IGBT transistors, dedicated for large photovoltaic power plants. The inverter works with string optimizers, thanks to which the system achieves high efficiency. The modular construction allows for the construction of an inverter with power from 250kW to several MW.


MMB Drives Sp. z o. o. is a company with 14 years of experience, founded by graduate students of the Faculty of Electrical and Control Engineering Gdansk University of Technology to commercialize the results of research and targeted projects financed by the Ministry of Science and Higher Education, implemented in a team led by Prof. Zbigniew Krzeminski, PhD DSc.
The main company business profile is based on the production of medium and low voltage inverters for the oil & gas industry. The experience gathered in the demanding market has been successfully implemented into products cooperating with renewable energy sources.
Technical Informations and orders: